The best way to prepare for the quantitative portion of case interviews is to practice the types of calculations you will need to perform with numbers representative of actual Case Numbers and to be familiar with the types of problems you are most likely to encounter and how to solve them. As a reminder, candidates cannot use calculators or spreadsheets in the case interviews, but may use pen and paper. All the Case Calculations take this into account, so Case Numbers and Case Calculations usually have certain characteristics you can use to simplify the calculations (if you are familiar with certain calculation methods).

When Case Numbers have more than one significant digit, they usually have additional properties that can make certain calculations like multiplication and division much easier if you are aware of the appropriate methods. For example, let’s say you are told a company sells a product for $32 per unit and sells 25,000 units per year, and you are asked to calculate the revenue. You would then need to do the calculation: ($32 × 25,000). Most people would use pen and paper for this calculation. You can make the pen-and-paper calculation more efficient by not writing out the three zeroes from “25,000” and then to add them to the end of the result of (32 × 25).

This article has numerous examples of the calculation methods taught in the FastMath Ace the Case online course and includes efficient solution methods to the example problems given in the previous article.

When adding large numbers, don’t write out (or mentally picture the number with) all the zeroes; simply write (or mentally picture) the leading digits and an abbreviation for the unit. For example, to represent “250 Million”—which, in long form, would be written as “250,000,000”—write/think “250 M,” or mentally remember the Unit and do the calculations and, when you write down the result, include the appropriate Unit.

To improve readability of equations, we may use the “bullet” (also called the “dot”) symbol “⋅” to indicate multiplication. Therefore, the equation (20 × 4 = 80) could be written as (20 ⋅ 4 = 80) with the bullet/dot symbol. This can improve the readability of equations where you are multiplying a number of terms as the dot symbol is smaller than the cross symbol “×” and so it’s easier to read variable names and numbers.

Next we need to divide by ½, which is the same as multiplying by 2.

Many of the Case Numbers involved in multiplication and/or division calculations in case interviews will have special properties, and are what we will call “Clean Numbers,” defined as being a “Clean Fraction” times an Integer power of 10. In this context, a “Clean Fraction” means both the numerator and denominator (what we will call the “elements” of the fraction) are non-zero integers that are each smaller than 10 - and often smaller than 5. 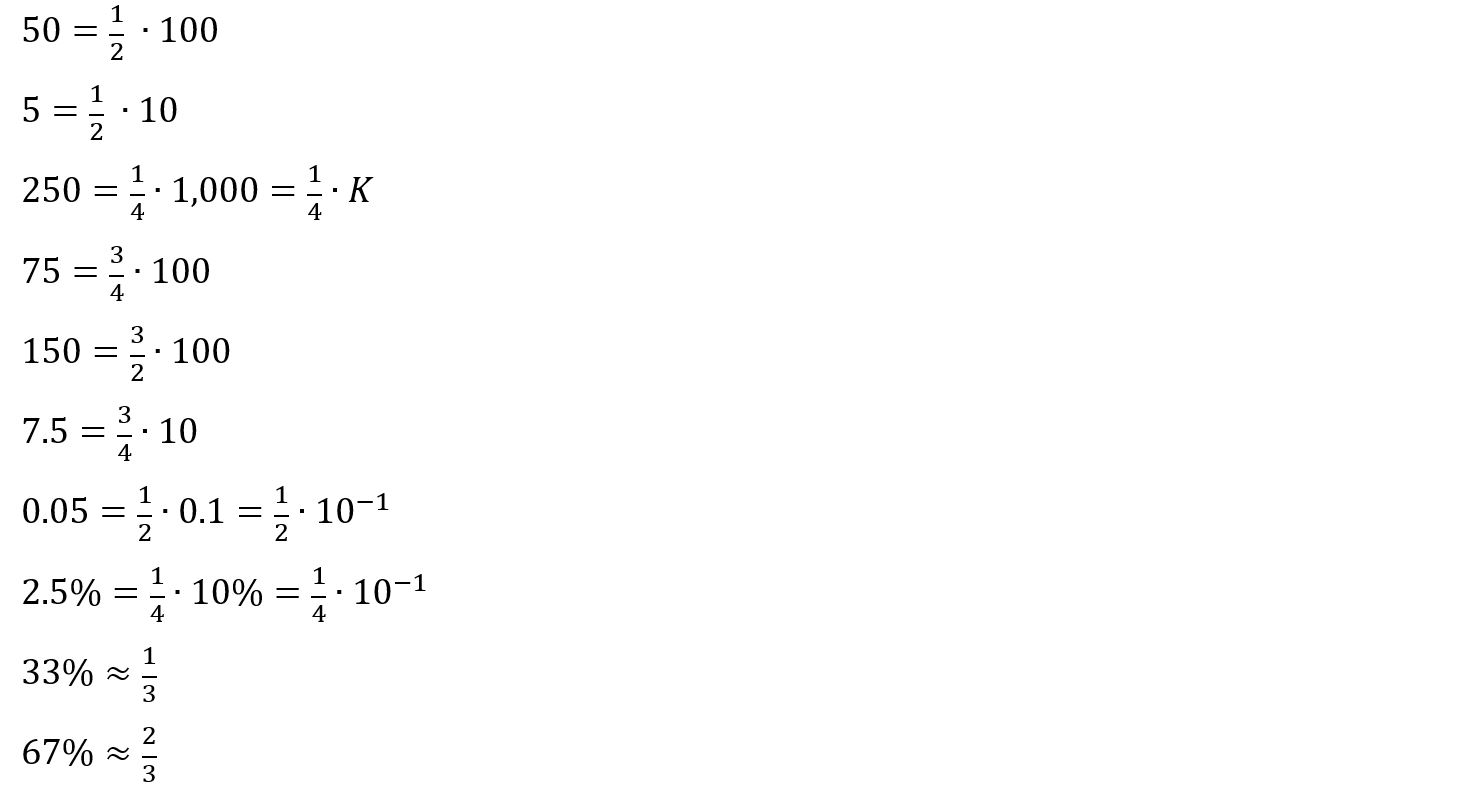 It is appropriate to ignore compounding when the percentage change and the number of years of growth are relatively small. The FastMath Ace the Case online course explains in further detail when you can use the non-compounding approximation, and provides additional methods for performing percentage-growth calculations when it’s not appropriate to use the this approximation.

There is a formula to determine the net NPV for an annuity, which is fixed payment that occurs annually ($C), for a given required annual return or interest rate (r), which is

This is a trickier NPV calculation than the prior one, as this is not an annuity, and we have to determine the NPV of a payment of $250 M in six years. There is a concept called the Rule of 72, which tells us that something growing at 12% annually will double in approximately six years, as: (6 ⋅ 12 = 72). In general, the doubling time for a quantity will be approximately 72 divided by the percentage growth rate (expressed as an integer) - in this example, 72 ÷ 12 = 6. This approximation is accurate for percentage growth in the range of 0%–20%.

The FastMath Ace the Case online course has an in-depth lesson on the Rule of 72, which explains when and how to use it, and why the approximation is accurate.

You can learn more about and register for this online course through the URL below, which applies a ~20% discount to the original price of $179.

The FastMath Ace the Case online course provides a comprehensive set of tools to prepare for the quantitative portion of Case Interviews. This online course uses video-based instruction to teach efficient calculation methods to improve your speed and efficiency for the most common Case Calculations (multiplication, division, percentages and compound growth calculations). The methods in this course are specialized for typical Case Numbers, and all the examples in this online course are based on real Case Calculations. The video lessons in this course demonstrate how to apply these efficient calculation methods to the most common types of quantitative Case Interview problems, such as Market Sizing problems and Break-even Analysis problems, and show how to solve these types of problems most efficiently. This course also includes practice problems and solution methods that reinforce the course material.

Matthew Tambiah is a former McKinsey consultant and has a Bachelor’s degree with Highest Honors in Electrical and Computer Engineering from Harvard, and an MBA from the MIT Sloan School of Management. He has hosted workshops on quant skills for consulting interviews at Harvard Business School, Wharton, MIT, London Business School, Georgetown and numerous other leading universities. His students have joined McKinsey, Bain, BCG, PwC, Accenture, and other leading consulting firms.

Previous
Mark as read Read
Next

Do you have questions on this lesson? Pose it to our community!

Ask a question
Search results for ""

Return to Fast Math: How to Master Mental Math