I have been practicing cases for a while. However, I still need to improve my  hyphothesis testing ability. Any tips/resources on how to practice hypothesis testing ? Grazie

I personally am "against" the phrase "my hypothesis is". There should be many hypotheses, at many levels, throughout your framework and the case.

Let's take my "Chinese Chess" case as an example: https://www.preplounge.com/en/management-consulting-cases/candidate-led-usual-style/intermediate/chinese-chess-airline-business-during-covid-19-191

One "hypothesis" should be that Revenues are the main reason for our crashing profits. This makes sense since the proft fall is covid induced. As part of this, we would also venture to guess that volumes are the main culprit as demand has shifted left and gov. regulations have prevented us from operating (hypothesis). There could also be price cuts as we're trying to attract people to flying (Hypothesis). Ultimately though, we need to look at how we can bring volumes back (Hypothesis). Again, we can hypothesis that volumes can be brought back by 1) Making sure we're meeting gov. standards around covid (i.e. do we have legal rights to fly) (hypothesis) and 2) Stoking demand by running promotions, marketing, and ensuring people we're safe to fly with (hypothesis).

Our 3rd bucket would be, if we can't bring back our profits by recovering existing revenues AND we can't bring them fully back by finding new revenue streams, we need to cut costs to make up this difference (hypothesis). We could probably do well by cutting excess capacity in the form of labor and leases (hypothesis). If we're desperate, let's look into government funding, as, I imagine, since we're in China, the government should be eager to prop us us with cheap capital (hypothesis)

Do you see how "hypothesis-led approach" is a ridiculous statement and out of date? How crazy it is to say "My (singular) hypothesis is"?

Never heard of a hypothesis testing question... a case interview in its entirety is about developing hypotheses...

Mit Premium freischalten
Stil:
Fit-Interview
Themen:
Personal Fit
Bewertung:
Tell me of a situation where you had an opinion and no one seemed to agree with you. What was your goal when you decided to join university / work / clubs / a sports team? Did you have a goal that you were not able to reach? What did you do? What do you want to be remembered for and how are ... (Ganzen Case öffnen)
40,8 Tsd.
mal gelöst
Fortgeschritten
Schwierigkeitsgrad
Bewertung

Mit Premium freischalten
Stil:
Fit-Interview
Themen:
Personal Fit
Bewertung:
What arouses your interest when you are working / studying / doing another activity (from the CV)? Tell me of a time where you had no idea what you were doing. When did you use an uncommon approach to do something? Have you ever had responsibility for other people? Tell me of a situation ... (Ganzen Case öffnen)
28,2 Tsd.
mal gelöst
Fortgeschritten
Schwierigkeitsgrad
Bewertung

Mit Premium freischalten
Stil:
Fit-Interview
Themen:
Personal Fit
Bewertung:
Tell me about a difficult situation you had to cope with. Tell me of a task which you didn’t like doing and explain why you performed it nevertheless. Why do you do things? What do you like doing most / What is your favorite hobby? Walk me through a situation where you showed leader ... (Ganzen Case öffnen)
25,4 Tsd.
mal gelöst
Fortgeschritten
Schwierigkeitsgrad
Bewertung 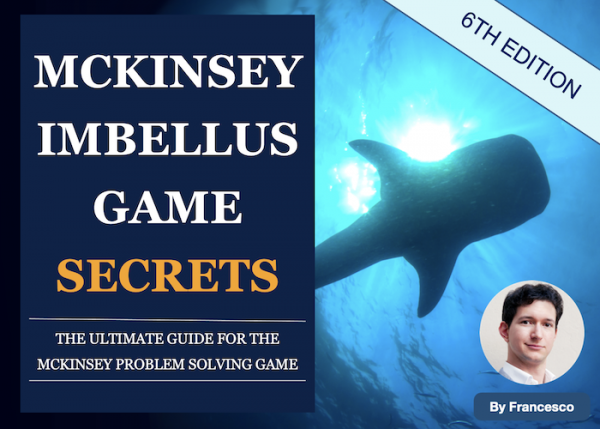