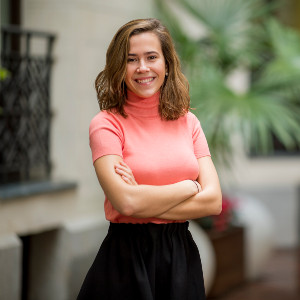 During this exercise, we will deep-dive in in one of the 3 dimensions tested in Behavioral Questions: ENTREPRENEURIAL DRIVE. Common questions that address this topic are:

*See Graph 1a – Note: "Behavioral Questions" are one of the 4 types of questions you can find in FIT interviews.

*See Graph 1b – Note: Most of the candidates stories relate to more than one of the dimensions tested

I –​ INTRODUCTION TO BEHAVIORAL QUESTIONS

What is tested with these questions?

Which communications techniques can be leveraged?

STAR or PARADE methodologies are “different” approaches/techniques that can be leveraged to communicate stories in an effective and structured way.

See below , for a question addressing Entrepreneurial drive, hints for the candidate to tailor a good answer.

Kindly ask the candidate before starting to provide you with his/her CV. Get familiar with it for a minute, since it can be useful (1) to follow the story better -most of the times it will be reflected in the CV- and (2) to be able to ask clarifying and follow-up questions.

I was a new hire in Amazon: barely 2 months tenure. Furthermore, my team was new –had only been launched in Sept that year- and we were 3 new joiners + 1 “tenured” employee + 1 manager

Black Friday week is a critical date for the year´s performance, since up to ~25% of sales are achieved then –that was our first year existing as a business unit-.

The more “tenured” team member was handling the BF week/campaign, and at the end of October announced he would leave the company mid November, just before the event

My defined role was “individual contributor” with very clear KPIs. Furthermore, I was (the whole team was) still in the 6 initial ramp-up months, during which I did not have to take any project on top of my core role

Hence, the problem seemed none´s responsibility, but everybody´s problem. Furthermore, I was the most senior among the 3 new joiners, and I felt I had to help the team by stepping up

I decided to step up and become the POC for the Black Friday event –although by then, I didn´t even know what that meant, since I didn´t know what needed to be done-.

Hence, 1st step was research: got clarity on the overall goals and methodologies from other teams –both the European counterparts and the B2C teams in my own geography-. Thanks to their guidance and my constant shadowing of their work, I replicated the same “preparation” that other teams were doing, catching up with job that should have been done weeks before

A key blocker was that we didn´t have any dashboard to control real-time the performance of our deals during the week, which resulted in no visibility and would have made troubleshooting almost impossible

Since we didn´t have time or BI (Business Intelligence) resources –they need to be pre-booked weeks in advance-, I leveraged an 80-20 approach built a dashboard without the needed SQL knowledge, by feeding an Excel model with account-by-account data extracted from the CRM manually at the end of each day (~1h manual work, shared among 3 people, not ideal but MVP)

The dashboard would give us daily visibility, and the only problem I couldn´t fix was the “data feeding” part (i.e., how the model inputs new data every day, that should have been done with an SQL query extracting the info directly from the data lake, but at that point I lacked the knowledge for that). Hence, I went around it the only way I could: manually downloading every day the EOD reports on each account that was participating in the campaign, and dumping that data as tabs in the model.

We had impact at two levels, during and immediately after the event:

•The dashboard provided visibility on sales and warned us from issues that would have been impossible to detect (+200 ASINs listed from 20 different accounts), so we could react on a day-to-day basis and fix them. This was one of the contributing factors to us not only reaching sales and growth target, but overachieving by 10% and 15% respectively

Personally, it taught me a valuable lesson: Despite not having the right knowledge, data, or access to it, you can always do an MVP (minimum viable product) that covers basics needs, even if not perfect, and improve it over time

*See Graph 3-4 : Suggestion on question delivery and timings for each part of the STAR/PARADE framework

Graph 1a : "Behavioral Questions" are one of th 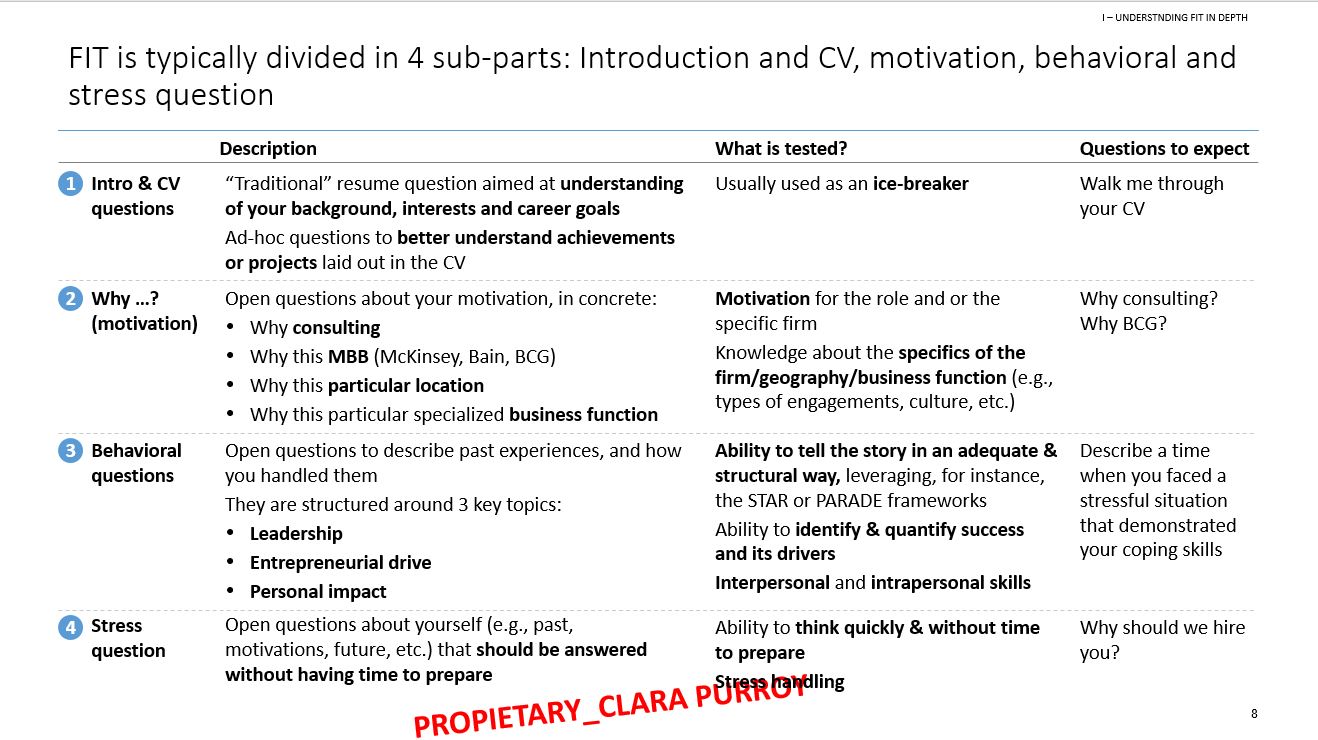 e 4 types of questions you can find in FIT interviews.

Graph 1b : Most of the candidates stories relate to more than one of the dimensions tested 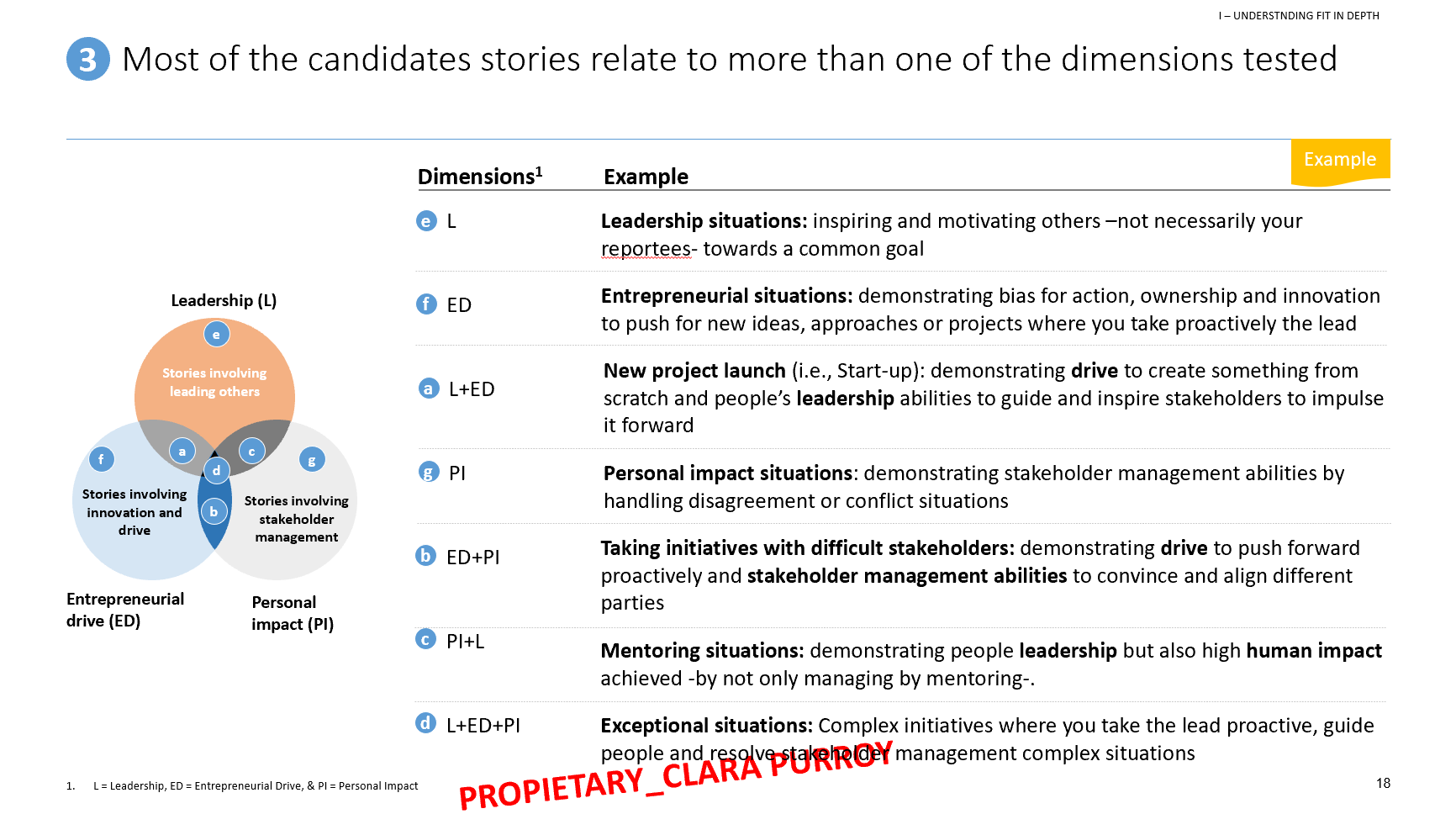 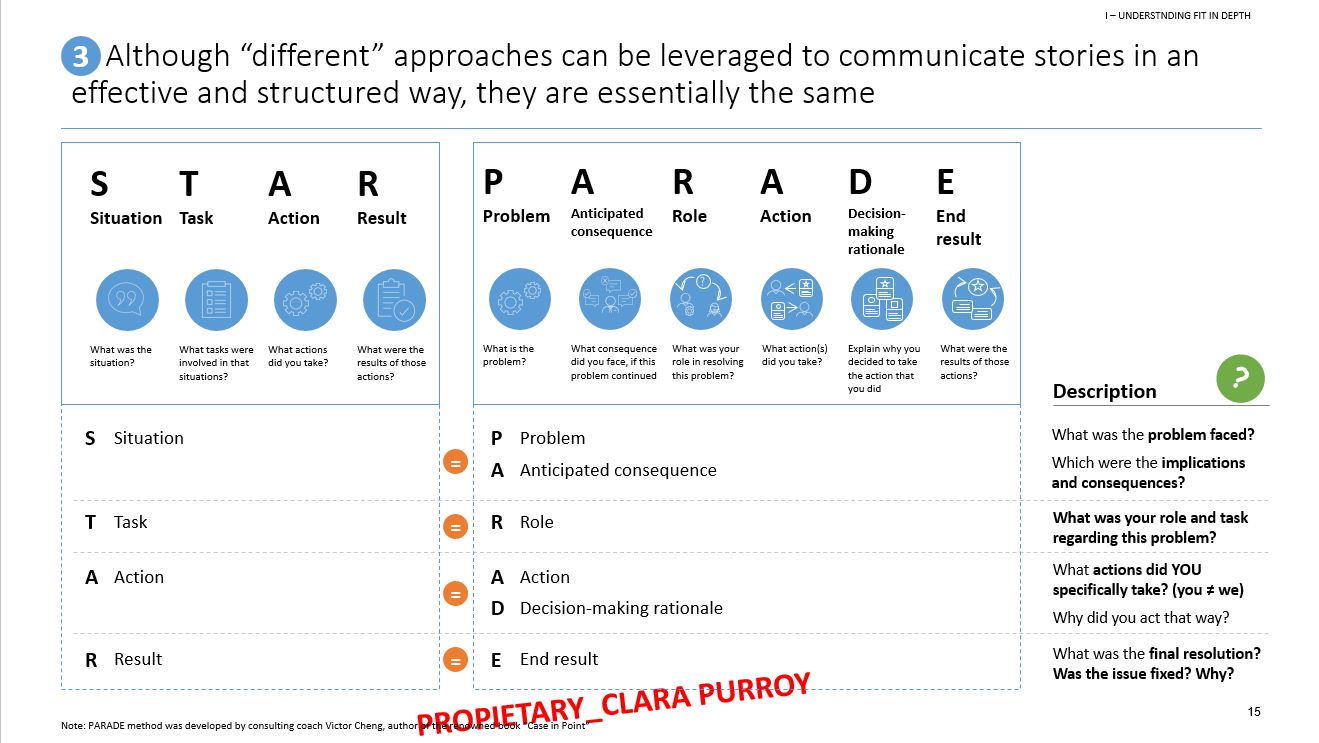 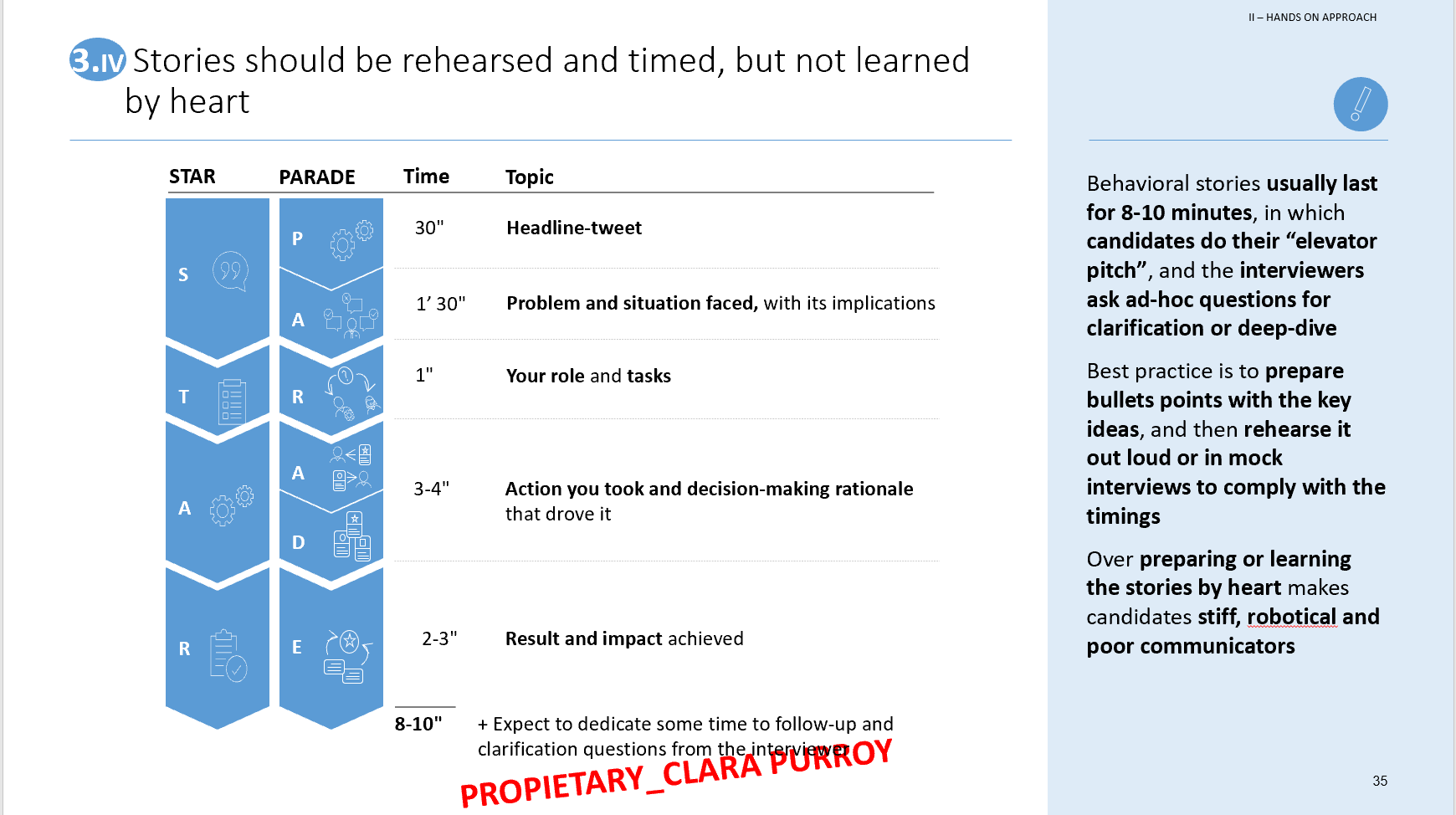 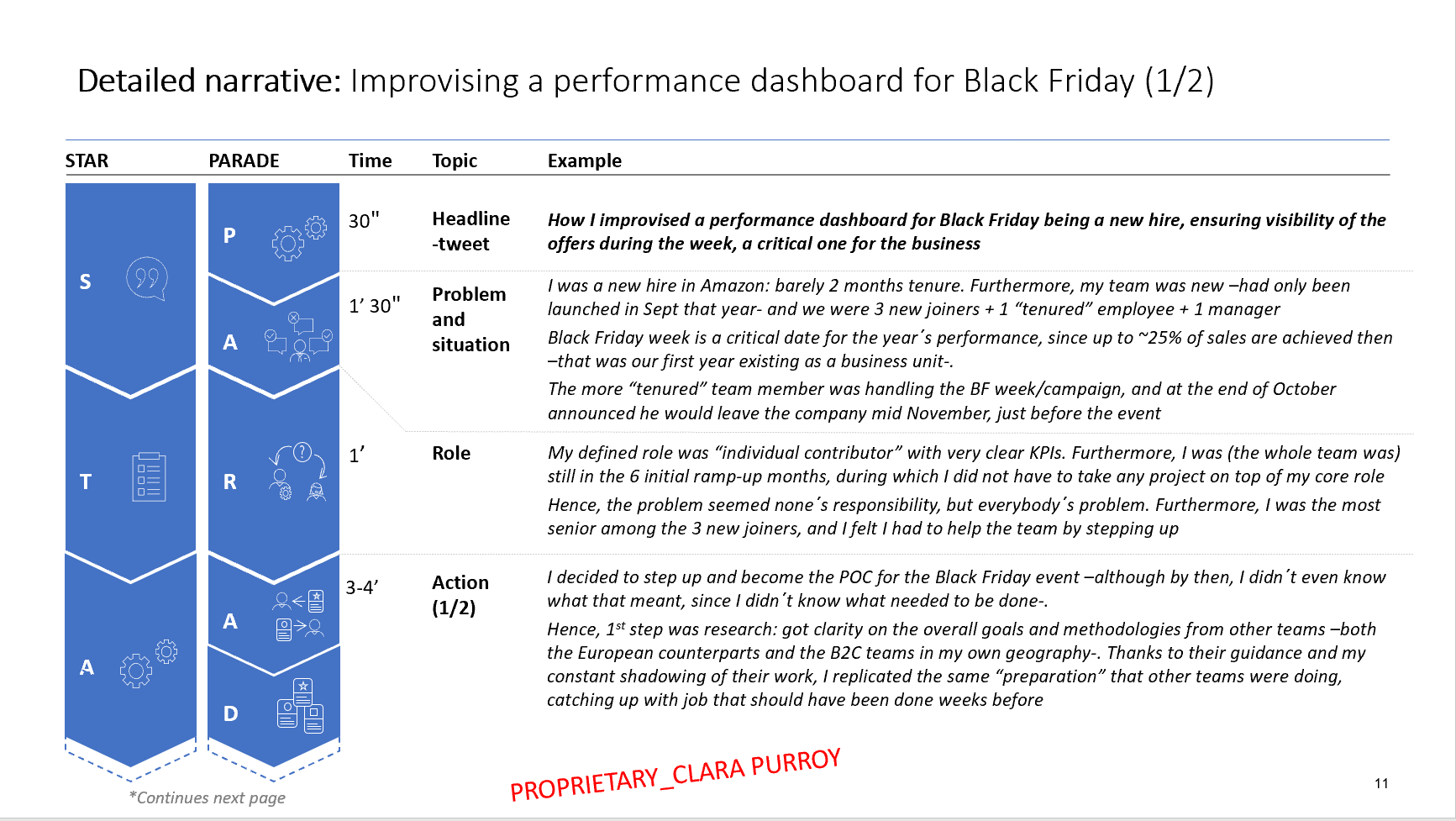 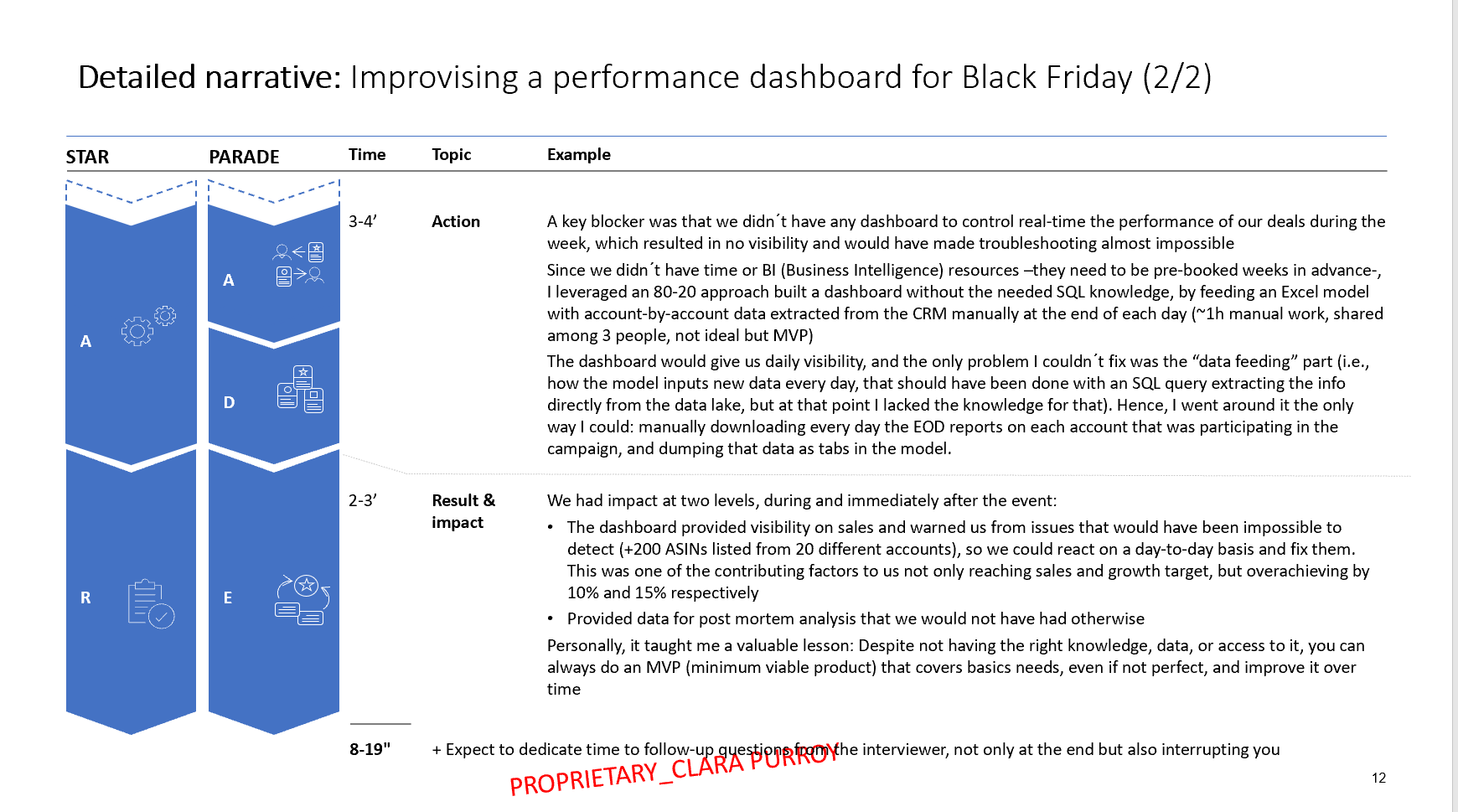 300+
Times solved
Intermediate
Difficulty
Do you have questions on this case? Ask our community!
Ask a question

Graph 1a : "Behavioral Questions" are one of th

e 4 types of questions you can find in FIT interviews.

Graph 1b : Most of the candidates stories relate to more than one of the dimensions tested