[PLEASE NOTE: This is a technically difficult case and should only be completed by those coming in as a Technology specialist, i.e. recruiting for McKinsey Digital, BCG Platinion, etc.]

Our client is a multinational oil and gas company. While they are vertically integrated and have upstream, midstream, and downstream divisions, they have recently been experiencing competitivity issues in the upstream gas division, which brings in $1B in profits annually.

Our client’s upstream division has offices in Australia and Indonesia. Their work is highly dependent on their IT systems, as they have to constantly monitor wells and pipes (pressure, hydrocarbon count, fluid makeup, etc.)

The upstream division has two large legacy IT systems that are primarily used for downstream operations but have been modified for upstream purposes.

These systems are managed by a central team in the US which is responsible for all IT issues across the business. They triage issues/enhancements and then manage development teams in India and Finland who complete the work.

This is an interviewer-led case based on a real-life project. This case could be seen across a range of consultancies and is well-suited to test candidates aiming for more operations and technology-based roles (I.e. BCG Platinion, McKinsey Digital, etc).

The case involves IT process improvements as well as efficient resource (employee) re-allocation/re-organization.

Do not attempt this case if you are applying for a generalist role.

The client needs to colocate BAs and developers in Australia. While this will cost $13.75M more in added employee wages, the client will get a colocation bonus of $80 million, resulting in a $66.25 million net benefit. This comes from the ability to streamline their processes, not have delays with timezones, and to be closer to the problem to be able to find adequate solutions more rapidly.

An important part of the case is that the interviewee must understand what is meant by “competitivity issues”.

In the client’s case, unit costs are quite high and their workers are not getting things done as quickly as competitors. This means the client has to hire many employees and pay a lot of contracting hours to do twice as much as other firms. The competitivity issues do not involve loss of clients, but rather process inefficiencies.

The root cause is that our client’s processes and supporting systems, such as software and technology, are very complex and old by industry standards.

A good candidate should recognize the following:

If the candidate asks about the process for raising/resolving issues/enhancements to the IT systems, you may state the following:

Like any IT system, these two systems are supported by an IT department. Users of the system submit issues and change requests and look to the IT department to resolve them.

The current process is as follows: any office would submit change requests into a central system, which is then prioritized and organized by US-based IT business analysts. These tickets then go to India for development, then back to the US analysts for testing, then back to the office that originally submitted the ticket for acceptance testing.

The candidate should note some of the following:

Prompt the candidate to suggest solutions.

The candidate should recommend any of the following:

Provide the candidate with Exhibit 1.

Exhibit 1 lists where our client’s employees are, and the percent of upstream business operations attributed to each office. IT resources are currently located in the US (Business analysts) as well as Finland and India (Developers). If the candidate needs clarification, you can tell them that, if IT resources were co-located, we would increase that location’s business operation profits by 10%.

The candidate should calculate the business impact of co-location in Australia and Indonesia respectively.

If they don’t opt to do this, prompt them.

The candidate should note that there is an annual co-location benefit of $80 million for Australia and $20M for Indonesia. A good candidate would then want to consider the cost of re-location (in terms of paying workers potentially higher salaries, moving costs, etc.)

Provide the candidate with Exhibit 2.

The candidate should run with the hypothesis that all resources should be co-located in Australia, given the huge impact to the business’ bottom line. Encourage this thinking.

Exhibit 2 provides a breakdown of where the client’s IT employees are currently located as well as their salaries (we can assume these are the primary costs to consider).

The candidate should take the calculated difference of current vs. new locations (-$13.75M) and subtract it against the colocation benefits of $80M to determine that the net colocation benefit is $66.25 million. 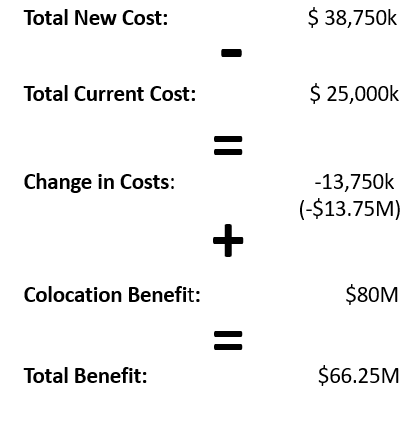 The candidate should come to the conclusion that the client needs to colocate the business analysts and developers in Australia. While this will cost $13.75M more in added employee wages, there will be a colocation bonus of $80 million, resulting in a $66.25 million net benefit.

There are risks in the client’s ability to find qualified employees in Australia and to effectively conduct knowledge transfer. In particular, there are risks that the transition period would be both long and difficult.

The client should gain a better understanding of the Australian IT market to determine if the required skillsets exist. They should evaluate whether hiring locally or bringing in the offshore developers is a better approach. Additionally, they should prepare a transition plan that ensures a smooth handover in both system knowledge and business processes. 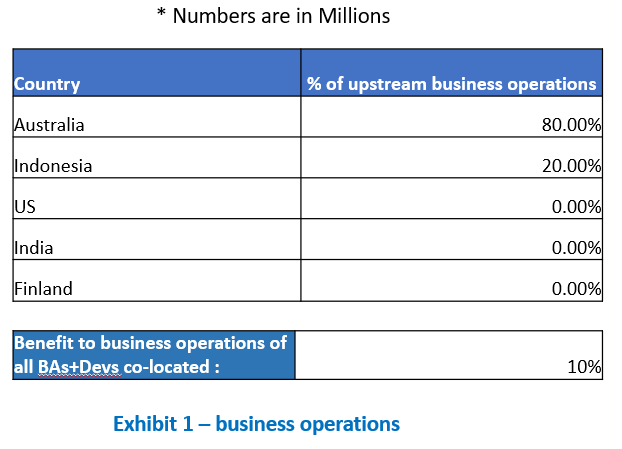 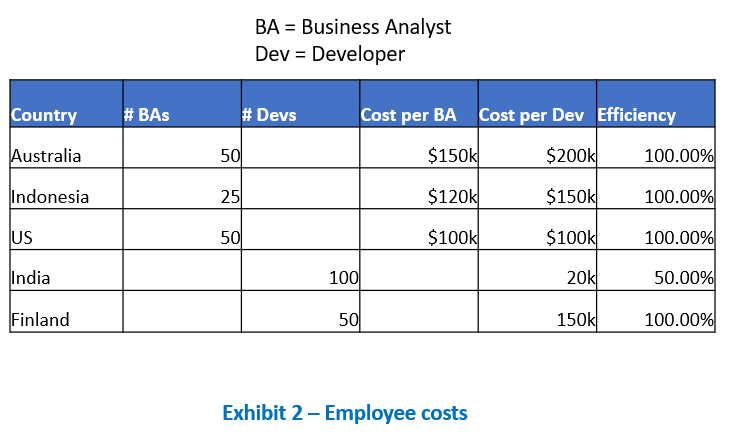 Quiz
3.5k
Times solved
Advanced
Difficulty
Do you have questions on this case? Ask our community!
Ask a question