What kind of projects does Mckinsey Operations Do?  Can you be a generalist at Mck Ops?

Per my understanding, Mck has Implmentation line, so the Ops team mostly does things on a operational strategy level right?

I browser through the website but I am still not very clear on this.

Is it common to see Ops folk exit to tech firm at PM/Biz Ops/Strategy role?

I worked as a Generalist in McKinsey Ops. Projects are usually pretty hands on where you’ll be on the shop floor, in a mine, factory, power plant, airport, etc. to optimize key business operations.

It’s pretty cool work where you get to work with data and advanced modeling but also with people. One of the things you’ll often find is that bottlenecks in a company’s efficiency is people - not machines.

One of my projects, for example, was to design a new planned maintenance strategy for a mining processing plant in Peru. Any minute of downtime creates loss for the company because ore can’t be processed, so downtime needs to be kept to a minimum. We did plenty of analyses around the challenge and touched on so many aspects of the entire operation and the people there. Took a few months, a lot of sweat, and a lot of arguing with the client. However, we got there in the end (of course, it’s McKinsey). This example is very representative of McKinsey Ops.

Final deliverable is called “strategy” but it’s basically a very comprehensive operational model with all sorts of new tools for said planned maintenance. We implemented this model but don’t get it mixed up with McKinsey Implementation. This is different (I won’t go into detail) but a certain overlap exists.

As for doing other projects - absolutely! I worked on M&As, commercial strategy projects, DDs, innovation labs, etc. It helped that I had an MBA I think but people generally aren’t as pigeon-holed in McKinsey if they don’t want to be and are smart about it!

A bit lengthy but hope this helps! Feel free to get in touch if you’d like to know more.

Was this answer helpful?
19
Book a coaching
Allen
Expert
replied on Jan 23, 2022
Ex-McK Experienced Hire and EM - I show you how to perform at your best

I'll add one more point that I don't believe has been mentioned yet.

While the website(s) will try to explain what is distinct about each practice and service offering, in real life the projects overlap.  For example, a ops strategy project might analyze and recommend decentralizing a distribution network and then move into another phase where they will help a client set up and launch the new distribution network.

Likewise, in real life, the consultants that work in the different practices have overlapping skillsets.  So while ops generalists or supply chain specialists might be natural fits for the first stage, the team will likely also consist of implementation folks who might be more of a natural fit for the second stage.  The team might flex as they move from one stage to the next but often not and you will work on both phases regardless of what practice you are in.

Hope this helps.  Happy to explain more, just reach out.

We need to be clear with the terminology.

Strategy is the “where to play” and “how to win”. It's defining in which markets/geographies/segments you want to compete, and how you will position yourself in that market/… (i.e. which value proposition, which assets, capabilities, etc.) and how to make it happen (operating model, business model, organizational strucuture, M&A strategy, partnerships, …).

Operations focuses on increasing a company's productivity and efficiency. So this will focus on processes, systems, inventory management, supply chain, etc.

So you should be able to be a generalist at Ops. I would not expect Operations people to move into Product Management or Strategy roles. Biz Ops could be possible… if you have tech experience/knowledge.

I'm going to be very blunt here: You will not survive as a consultant at McK unless you learn to research and find answers on your own. Respectfully, there is so much information out there on this.

I've shown some screenshots below. Did you know McKinsey also literally has a podcast called “McKinsey Talks Operations”?

Feel free to reach out if you'd like to have a coaching call where I talk you through this, but:

1) A quick Google returned everything you're asking for here

2) You need to be networking and having calls with Ops/Implementation folk to better understand this.

Was this answer helpful?
13
Book a coaching
No answers

Unlock with Premium
Style:
Candidate-led (usual style)
Topics:
Growth strategy , Mergers & Acquisition , Operations strategy , Valuation
Rating:
Our client is Energy England, one of northern England’s largest electric utility companies. They were created over the past decade through an aggressive series of mergers of existing utility companies each specializing in a single energy generation source.Recently, the CEO has embarked on an initiat ... (Open whole case)
4.3k
Times solved
Intermediate
Difficulty
Rating

This question was a deal breaker 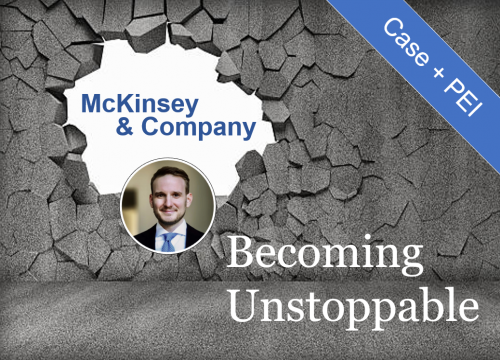 This question was a deal breaker

4 answers
Cookie and Privacy Settings
This website uses cookies to enable essential functions like the user login and sessions. We also use cookies and third-party tools to improve your surfing experience on preplounge.com. You can choose to activate only essential cookies or all cookies. You can always change your preference in the cookie and privacy settings. This link can also be found in the footer of the site. If you need more information, please visit our privacy policy.
Data processing in the USA: By clicking on "I accept", you also consent, in accordance with article 49 paragraph 1 sentence 1 lit. a GDPR, to your data being processed in the USA. The USA is not considered to have adequate data protection legislation. Your data could be accessed by law enforcement without prior public trial in court. If you need more information please view the individual settings.
I accept
Manage settings individually
Questions or Feedback?