Hello! I was wondering if there are any tips for mental calculations when doing multiplications with big numbers. I find that this is taking the most of my time and I think I dont have a good method.

Most people struggle with big numbers with a lot of zeroes. Here's how I teach my students and I've gotten great results w/ it.

It gets easier: do the following in your head:

and so on.. of course, things aren't as easy for fractions, etc but most errors happen due to these trailing zeroes and this method takes care of that.

2) Learn how to work with zeros. Best way - always use 10^power instead of zeros

PS, Additionally I suggest to learn how to make the division mentally:

Was this answer helpful? 19
19
Book a coaching
K on Jul 23, 2017
Can you elaborate on the division table? I only know divison tables being taught at school, with whole numbers. How granular would you learn the divisions?

Which is the most efficient way to multiply large numbers without losing track of zeros?

Sure, always use 10^power instead of zeros

Was this answer helpful? 4
4
Book a coaching
Originally answered question:

I use the following method and recommend it to all of my students:

You can learn to do it on paper fast in 1-2 hours, and it will take couple of days to train doing it mentally.

1) Learn how to work with zeros. Best way - always use 10^power instead of zeros

Was this answer helpful? 1
1
Book a coaching
Originally answered question:

my advice here: do NOT do such calculations in your head during an interview! You will not get ANY bonus points for this! The only two things that count are

(1) You are consistently correct in your math

(2) You can be easily followed

For this, do WRITTEN calculations. When properly done, it barely takes more time. But it is a much clearer way of communicating - and this is what is much much more important than speed! Doing math in your head is absolutely not client friendly: the interviewer will assume that this is how you will also act with clients. If the client can not follow you (because you are doing math in your head and are not being explicit with it, it is your fault!

That being said - it is certainly not harmful to practice such multiplications tables. But in the interview, please do the math properly in WRITTEN form!

Was this answer helpful? 5
5
Book a coaching
Originally answered question:

How I would do the examples you provided:

In general, I try break up numbers into smaller segments that are easier to manage. It also depends if it's easier to subtract (as I did in the second example above) or just add up the various segments (as I did in example 1).

In general, just a lot of practice with this will get you a lot better and enable you to solve questions like this in your head in a short amount of time - but I would still write it out in an interview to be 100% sure!

Starting by with a lot of zeros:

1) The obvious one: Taking the zeros out - doing the math - adding zeros in the end.

Regarding the second point with several digits

1) there are several ways to work it, trying to memorize multiplication tables, shortcuts - but for big ones I wouldnt worry much - from my experience with cases those are very rare, most of math is rather simple actually.

2) https://managementconsulted.com/mental-math-consulting/ This is a good tool for you to learn some quick ideas and to actually learn how to talk through your math which can be even better.

Was this answer helpful? 3
3
Carlos
Expert
replied on Jul 24, 2017
(On a break) Deloitte S&O BA l Certified by Cornell University for Interview Prep l First timers get 50% off second case

I think Vlad and Nuno made some great comments in terms of how to work / practice mental math. Adding to what they said, I've found success when I teach people to break down big numbers to smaller components and using the distributive property to solve the problems.

Take 888 * 20 as an example. In this case, I would write it as (800+80+8)*20 which then becomes (800*20)+(80*20)+(8*20). With the latter result, you can work the math much easier and then simply add the components you have in order to come up with the answer more quickly (this is a simplified example but give the approach a try with different number and you'll see that it helps). The key here is identifying which number to break-down in order to make the math easier.

Hope this helps! Feel free to reach out if you have any other questions.

you may have a look at this video:

Unlock with Premium
Style:
Interviewer-led (McKinsey style)
Topics:
Growth strategy , Market analysis , Market entry , New product
Rating:
Our client is SmartBridge, a nonprofit educational institution offering face-to-face tutoring services. The client operates in the US. The mission of SmartBridge is to help as many students as possible to complete studies and prevent that they drop from the school system, in particular in di ... (Open whole case)
19.4k
Times solved
Advanced
Difficulty
Rating

Unlock with Premium
Style:
Candidate-led (usual style)
Topics:
Market sizing , Profitability analysis
Rating:
We are an airline major operating out of India. We want to increase the number of passengers on all our flights. Could you please calculate the financial return of adding one more passenger per flight? ... (Open whole case)
16.7k
Times solved
Intermediate
Difficulty
Rating

Unlock with Premium
Style:
Interviewer-led (McKinsey style)
Topics:
Mergers & Acquisition
Rating:
Your client, REA, is a reinsurance company. REA recently acquired another reinsurance company (approximatively same size): the choice of this company was notably based on its product portfolio as well as its market presence which appeared complement with REA. However, the acquisition is not we ... (Open whole case)
12.1k
Times solved
Advanced
Difficulty
Rating

Nearly all the math required in case interviews is arithmetic: addition, subtraction, multiplication and division. We help you do calculations with large numbers quickly and without calculators.

Guide to Improving Speed in Written Tests such as the PST

Follow these instructions to significantly improve your performance and speed in solving problem solving tests used at McKinsey, BCG and Bain.

Your math skills will be tested in each and every consulting interview. So you better brush up mental math skills to succeed.

Apply these tips and tricks for outstanding mental math shortcuts to impress your interviewer in your next case interview. 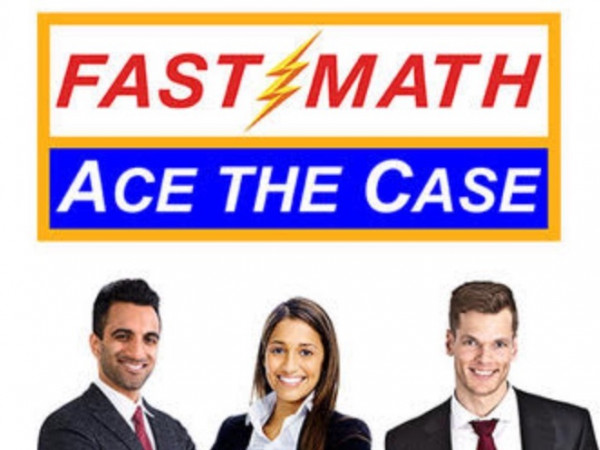 1 answer
Cookie and Privacy Settings
This website uses cookies to enable essential functions like the user login and sessions. We also use cookies and third-party tools to improve your surfing experience on preplounge.com. You can choose to activate only essential cookies or all cookies. You can always change your preference in the cookie and privacy settings. This link can also be found in the footer of the site. If you need more information, please visit our privacy policy.
Data processing in the USA: By clicking on "I accept", you also consent, in accordance with article 49 paragraph 1 sentence 1 lit. GDPR, to your data being processed in the USA (by Google LLC, Facebook Inc., LinkedIn Inc., Stripe, Paypal).
Manage settings individually
I accept
Questions or Feedback?