If profit is decreasing at a faster rate than are sales, why would this reflect the "fixed-cost nature of the business" (that's the answer in the case book but for some reason I thought it'd be the opposite)? Can someone help me understand what I'm supposed to draw about economies of scale from this graph and how? Thank you so much to everyone in advance! 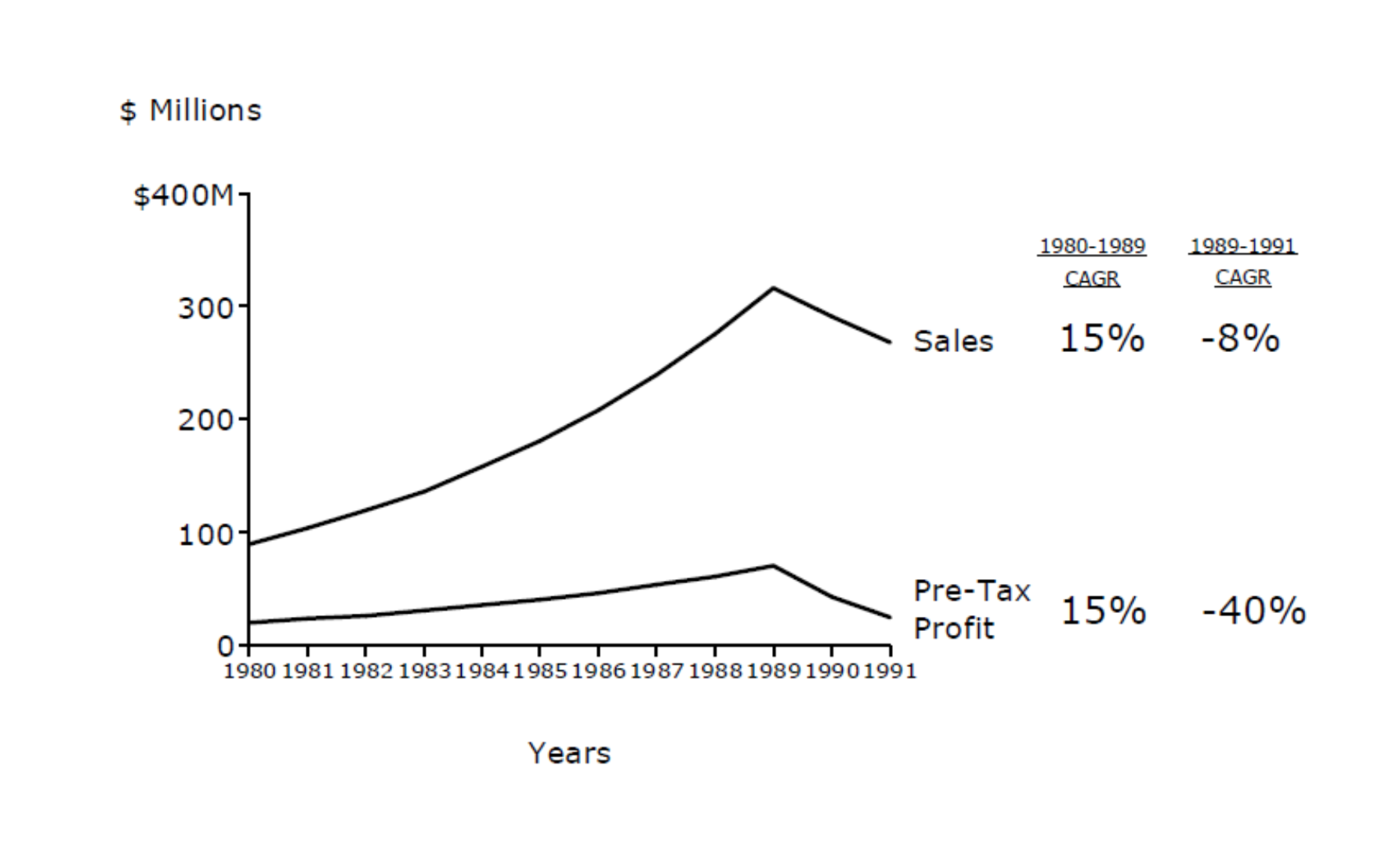 If profit is decreasing faster than sales, it means that as the sales declines, profits decline at a greater rate. What this means is that your revenues are declining but your costs are not declining in line with the revenues to keep match.

Now as you know there are 2 types of costs - fixed and variable costs. Variable costs vary with sales - that is, as you sell more you spend more on variable costs (lets say labor or materials). However fixed costs are fixed (for at least some larger amount of time) and cannot be reduced when production reduces.

The above explanation is relatively simple - it doesn't take into account many many nuances of the real world (e.g., labor is not really a fixed cost you can't hire and fire people that easily without serious repurcussions) but it would be sufficient from a logic perspective

Hi! Thanks a lot for the explanation. I’m trying to understand this - does it make sense to think of it as: since profits are decreasing faster than are sales, the costs must be mostly fixed. Variable costs are a function of the units of sales (i.e. they change with the number of sales made), so since we’re making fewer sales, costs should also have gone down because there are fewer units sold. However, costs are increasing as we see with the decreasing profits, so they must be fixed not variable??

Almost - profits decreasing in this case does not mean costs are increasing. Fixed costs are just that - they are fixed. So costs are not decreasing as fast as sales are leading to lower than expected profits

Variable costs only depend on units sold. Try to image a company with only variable costs:

If you sell 10 units, let's call "r" the revenues per unit and "vc" the variable costs per unit:

If you register a reduction in revenues, let's say 10% and you don't change the price per unit (meaning the revenues per unit, meaning "r"), it means that the units sold are decreased by the 10% (meaning you sell 9 units instead of 10).

But, if we introduce the fixed costs, let's call them "fc", as a fixed number that doesn't depend on units sold (e.g., rent, gas and electricity bills, machines, ...), you can see that if revenues decreases by 10%, costs don't decrease by the same amount, but less (because the fixed costs remain the same, no matter what), thus the profit decreases more than 10%:

Please let me know if something is not clear.

To many theoretical/math-based answers here...I think this is why you're struggling!

It costs you $100 to operate your lemonade stand every day. (Rent the cart, rent the neighborhood curbside, pay your cashier and lemonade maker, etc.)

Tomorrow it's raining so I'm going to sell 10 lemonades. Now, I lose $90 and every unit sold lost me 90 cents.

See how economies of scale in a high fixed-cost environment work now? :P

The Ultimate Guide for Your Case Interview in Consulting

Master your interview at Strategy& and land your Job!

Skills Needed to Survive in the Job as a Management Consultant

Get To Know LEK Consulting

Looking for a partner!

The Ultimate Guide for Your Case Interview in Consulting

Master your interview at Strategy& and land your Job!

Skills Needed to Survive in the Job as a Management Consultant

Get To Know LEK Consulting

Looking for a partner!