Through questions from the interviewer, the candidate is tested on problem-solving skills, so the entire case will have a question/answer format.

Our client is SuperBurger, a fast food chain that operates in the same class as McDonalds, Wendy's, Burger King and so on. They're the fourth largest fast food chain worldwide in terms of number of stores in operations. SuperBurger owns some of its stores, but 85% of its stores are owned by franchisees. As part of its growth strategy, the company has analyzed some potential acquisition targets including Tasty Donuts which is a growing doughnut producer active in the US and internationally.

The client asked us to help him decide whether he should acquire the company or not. 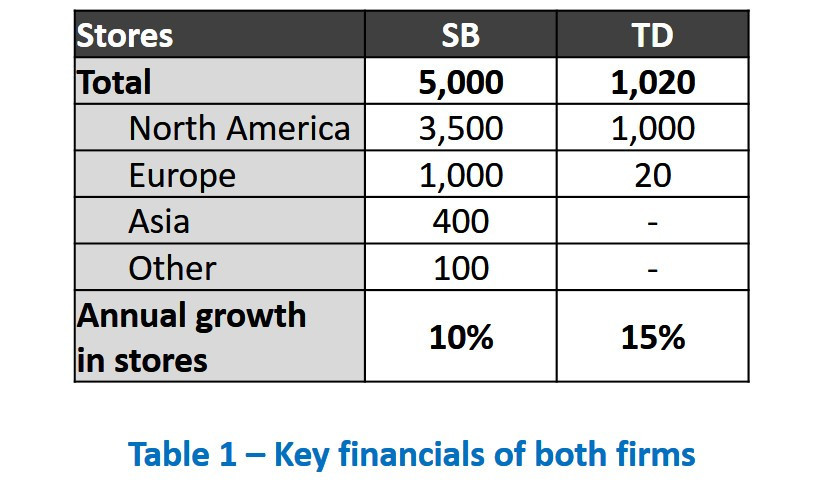 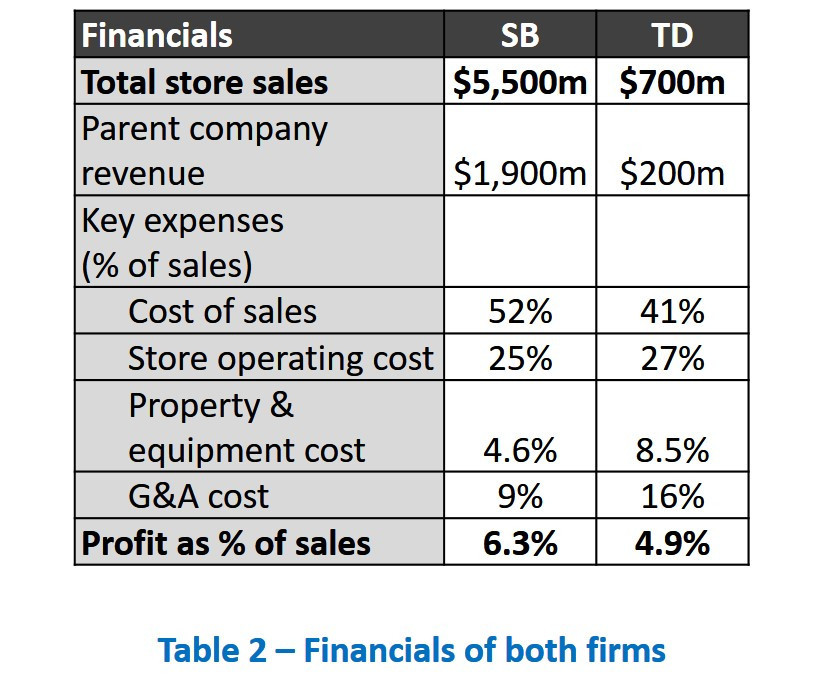 The following framework/structure provides an overview of the case:

What areas would you want to explore to determine if SuperBurger should acquire Tasty Donuts?

Assume we want to dig a bit deeper into the possible value of Tasty Donuts to SuperBurger, how would you approach it?

We've started thinking about potential synergies that could be achieved post-acquisition. What synergies do you think that can be realized based on key data.

The client thinks that with these synergies it should be possible to double the market share of Tasty Donuts in the US and increase their US stores by 2.5 times in 5 years. What sales per store will Tasty Donuts require in 5 years to achieve these goals? Assume that doughnut consumption is now $10/person and will grow to $20/person in 5 years and that US population is 300 m. You can also use data from Table 1 & 2.

Another form of synergy that could be valuable is the sale of doughnuts in SuperBurger's stores. How would you approach calculating/assessing the impact of this on profitability?

What would the extra profit per store be if we sell 60,000 doughnuts per store at a price of $3 and a 70% margin along with a cannibalization rate of 15% of SuperBurger sales?

What would you recommend so far to our client?

15.2k
Times solved
Advanced
Difficulty
Do you have questions on this case? Ask our community!
Ask a question
Your Uploaded Files This section allows you to upload your own notes or case structure for this case. The uploaded files are only visible to you.
Upload files
Questions on this case
Question on the case: SuperBurger

Can't we directly divide the total store sales with average expense per person to determine the number of customers ?

Mergers & Acquisitions are often the answer to broader problems introduced in your Case interviews. Analyze feasibility, assets, target, and industry to crack the Merger & Acquisition case

2 related questions
Cookie and Privacy Settings
This website uses cookies to enable essential functions like the user login and sessions. ... (Read more) We also use cookies and third-party tools to improve your surfing experience on preplounge.com. You can choose to activate only essential cookies or all cookies. You can always change your preference in the cookie and privacy settings. This link can also be found in the footer of the site. If you need more information, please visit our privacy policy.
Data processing in the USA: By clicking on "I accept", you also consent, in accordance with article 49 paragraph 1 sentence 1 lit. a GDPR, to your data being processed in the USA. The USA is not considered to have adequate data protection legislation. Your data could be accessed by law enforcement without prior public trial in court. If you need more information please view the individual settings.
I accept
Manage settings individually
Sign up for free to access our Case Library