Since this is a candidate-led case, the candidate should drive the case from start to finish.

This is a market entry case within the professional car racing industry. The case is based on a cost-revenue framework and introduces the interviewee to special aspects of the industry’s revenue model.

There could be a potential conflict of interest when allocating resources between teams.

(E.g., highly qualified mechanics from Jeff’s team may work with the Jazz Sweets team. This may affect Jeff’s performance.)

Your client is the owner of UBS #42, a rally racing team. There are 36 races in a season. At the end of the season, the driver who has earned the most number of points will win the championship.

Jeff Tarin, a well-known driver, races for UBS #42. He began racing in this tournament six years ago and is currently ranked fifth in a field of 40 drivers.

He has already asked a successful driver from a regional conventional racing circuit to be the new team’s first driver. Your client wants to know whether he should go ahead with this opportunity. 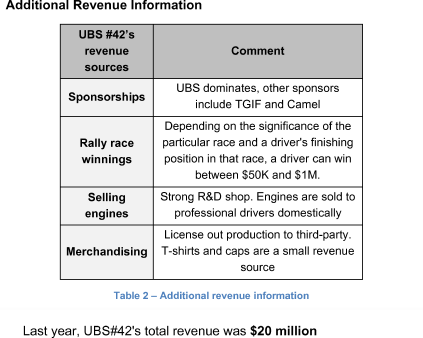 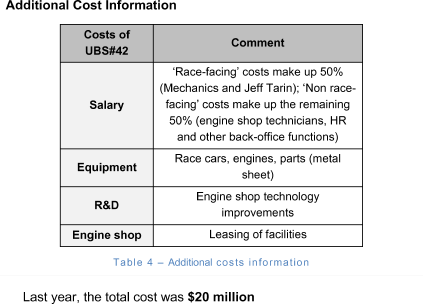 In a first step we investigate the revenue sources.

Share Table 1 with an overview of the revenue if inquired. Table 2 gives additional revenue information.

In a first step we investigate the revenue sources.

If Jazz Sweets pays to the new team half the sponsorship fees that the existing team receives, we will receive $6 Million.

Since the potential new driver is inexperienced in rally racing, the second team will only generate one-fifth of the race-winning revenue that the first team generates.

Share Table 3 with an overview of the costs if inquired.
Table 4 gives additional information about the costs.

Next, let us analyze the new team’s cost structure. It is essential to identify potential synergies between both teams.

Due to synergies, the new team can save some costs.

The candidate should include these points in the conclusion:

If the interviewee solves the case very quickly, you can come up with more challenging questions to ask them.

1. Should we ask Jazz Sweets to pay a premium sponsorship (more than $6 million) if they are the only sponsors of the new team?

The interviewer should evaluate the logic of the interviewee’s response. There is no right or wrong answer.

3) Another racing category (e.g., Formula One).

2. What are the main risks involved in launching a new team? How would you avoid these risks?

8.7k
Times solved
Beginner
Difficulty
Do you have questions on this case? Ask our community!
Ask a question
Your Uploaded Files This section allows you to upload your own notes or case structure for this case. The uploaded files are only visible to you.
Upload files
Related Case Interview Basics article(s)
Case Interview Basics

Get an overview over a company’s customers, competition, cost and capabilities by conducting a 4C analysis in your case interviews