How many gas stations are there in Paris? Suppose a friend of yours wants to open a gas station in Paris. What aspects should he consider?

There are several ways to estimate the number of gas stations. Their feasibility may be influenced by the amount of information the interviewer decides to give the interviewee. (In this case, there is not much information.)

Generally, an estimation method should use values that can be easily estimated and sanity-checked (verified using another approach).

There are about 938 gas stations in Paris.

Unless he finds other favorable conditions, your friend should NOT open a gas station in Paris because the industry is fiercely competitive.

Here, the interviewee should come up with two possible methods to estimate the number of gas stations in Paris.

The first approach is very inaccurate because the population density of a block can vary significantly. This could cause the number of gas stations per block to vary.

Share Table 1 (short overview) and Diagram 2 with the calculation tree if inquired by the interviewee.

First, we will calculate the total daily demand for gas in Paris (left side of the tree). There are about 10 million people living in Paris.

Since people below the age of 18 do not own cars and a lot of people use public transportation in Paris, we can estimate that there is 1 car for every 5 people.

In total, there are 2.5 million vehicles.

To estimate the consumption per vehicle, we assume that cars have tanks of 50 liters. The tanks must be replenished every 10 days. Thus, each vehicle consumes 5 liters of gas every day.

Since commercial vehicles are on the road more frequently, they consume up to 5 times more gas than private vehicles.

We can calculate a weighted average of daily gas consumption per vehicle.

Thus, the demand for gas in Paris every day is 22.5 m liters.

Now, we can estimate the right side of the tree.

Assume that every time a vehicle visits a gas station, normal vehicles buy about 50 liters while commercial vehicles (some of them are trucks) buy about 100 liters.

This gives us an average of 60 liters bought per vehicle.

This gives us about 938 gas stations in Paris.

Suppose your friend wants to open a gas station in Paris. What aspects should he consider?

A good response to this question will consider both the attractiveness of the general industry and the proposed location of the gas station (Paris):

This is a difficult industry to enter.

Your friend should only go ahead with this idea if there are other favorable conditions such as:

What other sources of income could you think of for a gas station in a big city?

If the interviewee solves the case very quickly, you can come up with more challenging questions to ask them. 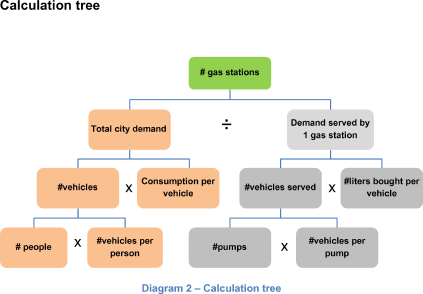 Every time related variable (e.g. demand, consumption, # vehicles served etc.) is based on days.
Do you have questions on this case? Ask our community!
Ask a question
Related BootCamp article(s)

Market sizing questions in case interviews are used to test your quantitative & reasoning skills. We show you how to solve them using a step-by-step approach.

2 related questions
39.8k
Times solved
Intermediate
Difficulty
Do you have questions on this case? Ask our community!
Ask a question

Every time related variable (e.g. demand, consumption, # vehicles served etc.) is based on days.
Cookie and Privacy Settings
This website uses cookies to enable essential functions like the user login and sessions. We also use cookies and third-party tools to improve your surfing experience on preplounge.com. You can choose to activate only essential cookies or all cookies. You can always change your preference in the cookie and privacy settings. This link can also be found in the footer of the site. If you need more information, please visit our privacy policy.
Data processing in the USA: By clicking on "I accept", you also consent, in accordance with article 49 paragraph 1 sentence 1 lit. GDPR, to your data being processed in the USA (by Google LLC, Facebook Inc., LinkedIn Inc., Stripe, Paypal).
Manage settings individually
I accept