This case is designed to practice breaking down quantities into its component parts. In this particular case, the revenue of a restaurant will have to be broken down. The case should be tackled in two phases:

Phase 1 (breakdown and benchmarking) should be about isolating the key factors that influence the revenue of a restaurant and then to compare those to the franchise average for benchmarking to identify the factors that can be improved.

Phase 2 (testing improvement options) should be about testing if it is possible to improve any of the factors that have been identified to improve overall revenue.

Your client is a Franchisee of a popular Steakhouse-chain in Germany. The Franchisee currently owns 2 Steakhouse-restaurants and wants you to investigate how well these perform and if there is any way for improvement? 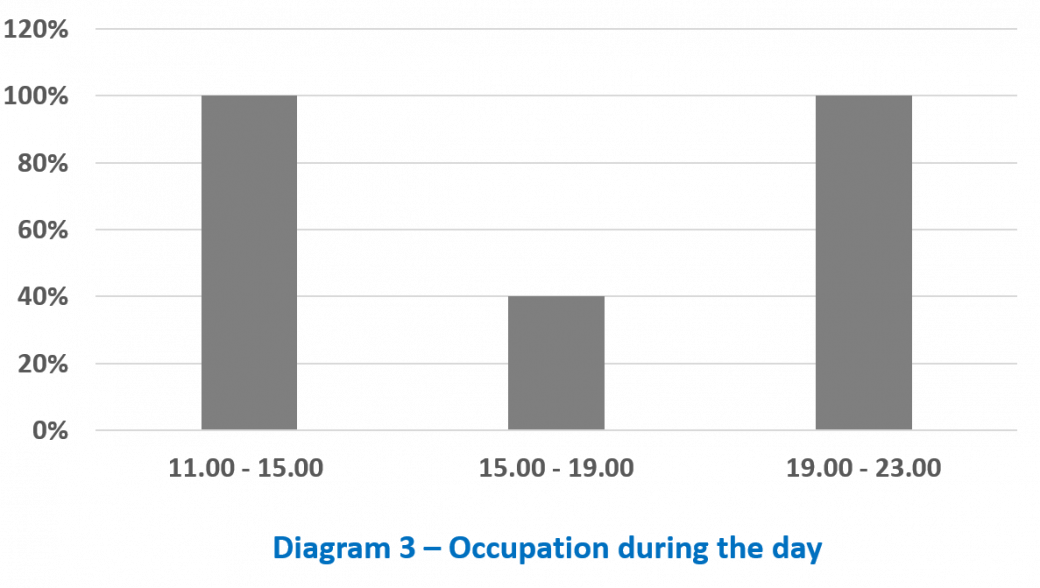 I. Understanding the Case & Structure

Information to be revealed to the interviewee upon request:

You should ask the candidate to break down the revenue for a typical steakhouse by describing it with an equation like this:

If the candidate struggles to come up with the full equation you can provide some hints and guidance.

You can now provide information to each of the factors in the equation upon request:

Do not give the candidate the data for both restaurants straight away. Wait for the candidate to decide which restaurant they want to get data on first and reveal only that. Then point out that you have average data for all franchisees as a benchmark in Diagram 2.

Now you can share with the interviewee the data on Ham verbally if they asked for Dus data first:

To help the interviewee calculate the average occupancy for Ham and Dus you can now reveal Diagram 3. Ask the interviewee to come up with a reasonable hypothesis for the underlying reason for the fluctuation in the occupancy. The answer is that during lunch and dinner time occupancy is highest and in between it is lowest.

1) Ask the interviewee to summarize what they learned from Diagrams 2 and 3 and to indicate which factors for each restaurant could be improved based on a comparison between the restaurants and the franchise average.

2) Ask the interviewee if there are any factors amongst the 5 factors that influence revenue that cannot be influenced by the client and why that might be the case.

3) Ask the interviewee to list all improvement options they consider worth investigating. The interviewee should come up with only the 2 listed above based on the data provided so far.

Insights for Diagram 2 and 3 as well as the data on Dus and Ham:

=> Increasing the number of seats to the franchise average might increase revenue if enough demand exists to fill those seats.

=> Decreasing the average mealtime per customer to the franchise average might increase revenue if enough demand exists to fill those seats at a higher rate.

1) The first part of the client objective was to determine how well both restaurants perform. We can conclude that the restaurant in Dus has an annual revenue very close to the franchise average which means its performance is average. Ham has an annual revenue above the franchise average, so it performs above average. We will now need to investigate if the performance of either of those restaurants can be improved.

2) Looking back at the 5 factors that determine revenue: occupancy, #seats, opening hours, mealtime and customer spending which were listed on Diagram 2 we can see that opening hours and customer spending is fixed for all restaurants of the franchise. Opening hours are dictated by the franchisor so this factor cannot be changed to improve revenue performance. The average spending per customer can also not be changed as pricing policy as well as any marketing decisions are made by the franchisor so the only factors a franchisee can influence are #seats of the location they chose for their restaurant and the average mealtime per customer.

This narrows our optimization considerations down significantly:

For Dus, we could potentially improve #seats as it is below the industry average. Improving the average mealtime seems unlikely though as we are significantly below the average already. Dus has, in fact, the lowest mealtime of all restaurants within the franchise.

Now that we have isolated our options we need to investigate which of these options are viable or not:

To help the interviewee determine if the option for Dus is viable you may reveal the following information upon request:

Ask the interviewee to interpret this information. The interpretation should be similar to the paragraph below in the solution.

For factor 2, Increasing #Seats is Possible:

The best option is to increase the #seats factor. We can see if this will generate more revenue by considering 2 factors:

In other words, we are trying to determine if doing it will actually help and if we are even able to do it in the first place. Both must be true for this option to be viable!

=> Even though increasing the #seats during peak times will increase the revenue of the restaurant it is impossible to increase the number of seats for 3 reasons:

So the #seats cannot be increased therefore the performance of the restaurant in Dus is already maximized and cannot be improved further by the client.

To help the interviewee determine if the option for Dus is viable you may reveal the following information upon request:

Ask the interviewee to interpret this information. The interpretation should be similar to the paragraph in the solution.

Factor 2: Why is the mealtime of Ham so slow? For this you may tell the interviewee the following upon request:

A good interviewee will identify that the service can only be slow for one of three reasons:

The information above is sufficient to identify that the issue lies with the kitchen alone and what exactly is going wrong there. If the interviewee struggles to structure this part of the case ask them to think about what people are involved in the service to get them started.

The best option is to decrease the average mealtime per customer. We can see if this will generate more revenue by considering 2 factors:

In other words, we are again trying to determine if doing it will actually help serve more customers and if we are even able to do it in the first place. Both must be true for this option to be viable!

=> Decreasing the average mealtime will allow us to serve more customers during peak times which will increase the total number of customers served daily. During off-peak times the occupancy will be slightly less as the same number of customers will be served in a shorter time interval which decreases the occupancy, however, this effect of lowered occupancy only affects a short part of the total opening hours so the decrease in average occupancy will be offset by a net increase in customers served during peak times per day. If we decrease the average mealtime per customer by 1/6 which is roughly 17 % we can serve 20% more customers.

Next, we need to see if we can realize a 17% reduction of the mealtime in Ham so we will now move on to factor 2 to test that and find a way to achieve that reduction if there is one.

=> The reason for the slower than average service speed is the kitchen of the Ham restaurant. The restaurant does not split up the workload between chefs who only focus on making a single type of dish. Instead, every chef makes every dish simply in the order the orders come in which is very inefficient. The kitchen system of Dus can be copied for the Ham kitchen without any cost or training necessary to immediately decrease the average mealtime per customer by 40% which is more than enough to prevent queues from forming during peak times and increase annual revenue by 12.5 %.

The Dus restaurant is working at maximum efficiency and its performance cannot be improved by the client. The annual revenue performance of the Ham restaurant can be improved by 12.5 % if the kitchen team of Ham copies the way the Dus team handles orders. The following 3 reasons support this conclusion:

1) The performance of the Dus restaurant can only be improved by increasing the #seats available as it is already the restaurant with the fastest service in this franchise. Increasing #seats is impossible due to the fact that the location the restaurant is at is under monumental protection.

2) The current kitchen service of the Ham restaurant is very inefficient. Adopting the same approach to handling orders as the Dus kitchen team will allow a mealtime reduction per customer of 24min which will result in a 20% increase in the number of customers being served per hour during peak times which in turn increases annual revenue performance by 12.5%.

3) As the kitchen teams of Dus and Ham are comparable in terms of skill no retraining is necessary to decrease the mealtime for customers of the Ham restaurant. The change can be implemented easily, immediately, and cheaply.

To find additional ways to raise the revenue of both restaurants further than the 12.5% for Ham only we could take a step back from the revenue analysis and look at the restaurants more holistically by considering 2 points:

1) Can we provide any service or entertainment for customers in the queues to prevent them from choosing another restaurant if the queue gets too long such as for example a drink on the house for every 15min spent waiting in the queue etc? This way we might be able to retain more customers and thus increase revenue. For this, we need to see how many customers leave the queue before being seated on average and if there is a way to retain those.

7.2k
Times solved
Advanced
Difficulty
Do you have questions on this case? Ask our community!
Ask a question
Your Uploaded Files This section allows you to upload your own notes or case structure for this case. The uploaded files are only visible to you.
Upload files
Related Case Interview Basics article(s)
Case Interview Basics